Some days I just smile a lot

This article put a smile on my face.

The Colorado State University Board of Governors voted unanimously Tuesday to place students at both of its campuses in harm’s way with a sweeping weapons ban...

Larimer County Sheriff James Alderden, outraged by the ban, told The Gazette’s opinion department he will undermine it in the interest of student safety.

“I have told the CSU police chief I will not support this in any way,” Sheriff Alderden told The Gazette. “If anyone with one of my permits gets arrested for concealed carry at CSU, I will refuse to book that person into my jail. Furthermore, I will show up at court and testify on that person’s behalf, and I will do whatever I can to discourage a conviction. I will not be a party to this very poor decision.”

I will admit not to be totally happy with the idea thou. I feel if you control a property then you make the rules there, and those who enter have the right to stay or leave....but a school of higher education is not exactly a fast food joint you can skip in life and find another real quick. That's why I am all for this Sheriffs comments.
at February 26, 2010 1 comment:
Email ThisBlogThis!Share to TwitterShare to FacebookShare to Pinterest

Looks like at least one AR rifle was in the take on this gun store smash and grab...but remember. Gun laws will keep guns out of the hands of criminals.

at February 07, 2010 2 comments:
Email ThisBlogThis!Share to TwitterShare to FacebookShare to Pinterest
Labels: D'oh

My Uncle sent me some nice images of another rifle he has and I thought I would share them with you and just a little history. The rifle is a Stevens single shot .25Stevens rimfire long. As the images show it is a lovely example of a breach loading firearm that seems to be attempting the cross the line between rifle and handgun. 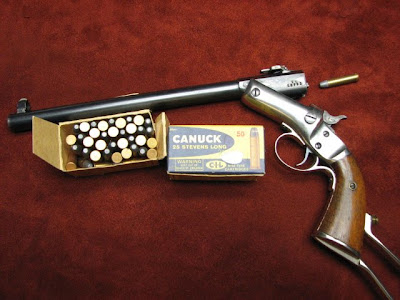 The stevens comapny was founded right near the end of the civil war.

STEVENS, J., ARMS COMPANY
J. Stevens Arms Company was founded in 1864 at Chicopee Falls, MA as J. Stevens & Co. In 1886 the name was changed to J. Stevens Arms and Tool Co. In 1916, the plant became New England Westinghouse, and tooled up for Mosin-Nagant Rifles. In 1920, the plant was sold to the Savage Arms Corp. and manufactured guns were marked "J. Stevens Arms Co." This designation was dropped in the late 1940s, and only the name "Stevens" has been used up to 1990. Beginning in 1999, Savage Arms, Inc. began manufacturing/importing Stevens trademarked guns again, including rifles and shotguns.

The catirdge offers no great advantage over the .22lr, but it was one of many new rounds coming into a growing new market after the civil war. 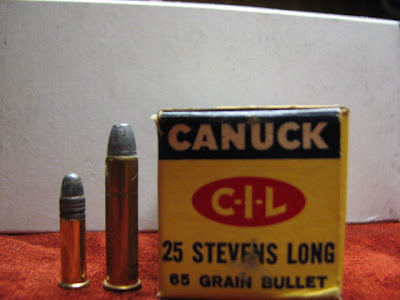 The term "pocket rifle" is normally used for this style of firearm but some also call it a "bicycle rifle". This advertising found online does use that term. Others also produced pocket rifles during the same period. 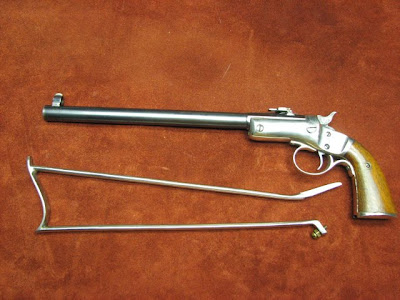 From Firearms in American History, Volume 3 By Charles Winthrop Sawyer we have this plate and information on 4 different pocket rifle modes. 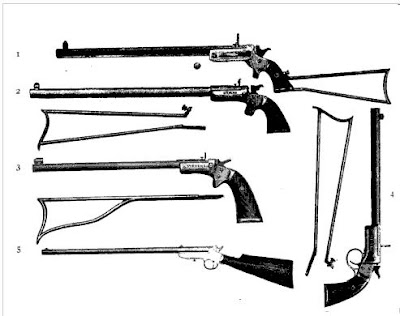 No. 1, "Hunters' Pet." With 24-inch barrel this rifle weighed about 6 pounds. The ammunition was .32, .38, and .44 rim and center fire. The price, which was rather high for the time, ran from $18.00 for the one with 18-inch barrel to $21.00 for the one with 24-inch barrel; this indicates that the Hunters' Pet was intended to be accurate and serviceable. The breech of the barrel when released by pressure upon a stud in the right side of the frame tipped up to extract and be loaded. As the catch spring soon lost a portion of its strength, and as the axis screw of the barrel and the sides of the frame adjacent to it soon permitted growing looseness, the barrel after a very little use was wobbly in the frame. However, as the rear sight was fixed on the barrel, and as the barrel was heavy, accurate shooting still was possible; and the ease with which the arm could be taken apart for packing in a small space and the extreme simplicity of the make-up induced users of this type of arm to overlook its shortcomings. The weight, however, was another matter; and on account of continual criticism the Hunters' Pet was soon succeeded by lighter and also less expensive issues of the same general design. It disappeared from the market about 1888.

No. 2, "New Model Pocket Rifle" The stud for releasing the barrel catch was transferred to the left side of the frame so as to be used by the thumb. The whole arm was a diminutive, its weight with 10-inch barrel being only 2 pounds. The ammunition was .22 and .32 rim fire.

No. 3, "Reliable Pocket Rifle." This was the Diamond Model pistol with long barrel and adjustable skeleton stock.

But the best way to give you an idea of the usages of a Stevens Pocket Rifle are in the words of the people who used them.

Camps and tramps in the Adirondacks, and grayling fishing in northern Michigan
published 1882

The birds themselves, of a bluish gray color, with their small, slim bodies and long, thin necks and legs, looked like the dead limbs of the nests and the surrounding trees that they sat on, (a fact freely offered to Darwin); and they had a way of standing up in their nests, like sentinels, and, when shot at, slowly sinking down until they were invisible. A lucky shot with a " Stevens' Pocket Rifle "—a wonderful little weapon with ten-inch barrel, and of twenty-two calibre—at a distance of fifteen or eighteen rods, brought one of these birds from its perch near its nest, a hundred feet from the ground, to the water in which the tree was standing. It came down with a tremendous thump and splash, dead. It measured, from....

To shoot frogs requires even more skill than to spear them. For shooting, most hunters prefer a small, accurate weapon, such as the Stevens pocket rifle, which costs a trifling sum. You will remember that your rifle may be sighted for a longer range than is common in frog hunting. If your gun issighted in this way and you aim your gun at the middle of a frog's body, you will hit some little distance above the frog. You should take aim an inch below the frog at a distance of ten feet.

Hunting the great West: (Rustlings in the Rockies).
published 1888

I took my little Stevens pocket rifle (which I always cairy with me when fishing), Leroy took the oars, and we pulled out toward the loon. When we got within about fifty yards of him, he dove. We pulled in the direction he took, and when he rose I fired at him. He went down again, and when he reappeared I shot at him again; the bullets in each case cutting very close to his neck. The third time he came up he was not more than forty yards from us. I drew another Dead on him, and by a lucky shot killed him—the bullet passing through his neck about an inch below the occipital joint. We returned to camp with our prize, and received the hearty congratulations of our friends on our success. The bird was one of the finest specimens I have ever seen, the plumage being unusually full and beautiful. I brought the skin home, and have had it mounted.

I think just showing images without history is meaningless.

Here is a story that would make any gun grabber cry. A small bit about a book being published in in Boston in 1882 and a short bit on the subject.

Lee & Shepard, 1882 [1881]. 274 p. il. S.
(Silver medal stories.) cl., $1.25.
A tale, written especially for boys, though boys and girls may alike enjoy it; the pocket rifle is a prize offered in a country school for the best speller ; the competition is narrowed to the two cleverest boys in the school, who have been great friends, but who, through the rivalry and jealousies of the contest for the rifle, become estranged ; its moral is obvious and one that all young people may reflect upon. Trowbridge, J: Townsend. The emigrant's story, and
other poems. New ed. Bost., Houghton, Mifflin & Co.,
1881. 6+174 p., 12°. Cl., $1.35.