Back in March I noted an advert for a political campaign that did not set well with me. Not due too anti-patriotism or his political views, but because it seemed to be pandering.

It does though seem to be pandering to the political 'war patriotism' that is surging and using it for your own advantage. 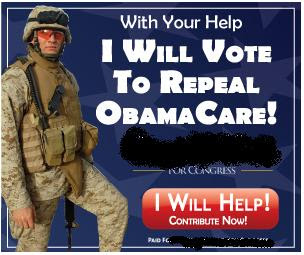 ParatrooperJJ said...
Most likely a election law violation as well as potentially a criminal violation.

I was not sure as I did not see any insignia on it and figured the dude might be skirting the law that way. In life if you make a law people will find ways around it. Well guess what? He did not skirt the issue enough and now it is being reported that the military has gotten involved.

Congressional candidate Vaughn Ward has violated a Pentagon directive prohibiting the impression that his campaign is supported by the military, according to the Marine Corps.
........
Ward and state Rep. Raul Labrador are the top candidates in the May 25 Republican primary. The winner will challenge Democratic Rep. Walt Minnick in November.

The Marine Corps wrote Ward earlier this month saying his online ad on the Drudge Report website on March 31 and April 1 violated the directive. The ad showed Ward in camouflage and body armor and said, "With Your Help I Will Vote To Repeal ObamaCare!"
......
But the ad failed to provide the"prominent and clearly displayed disclaimer that neither the military information nor photographs imply endorsement by the Department of Defense or their particular Military Department."

The ad had no disclaimer of any kind.

"Maj. Ward was asked in writing to remove this ad because it did not comply with the (Department of Defense) Directive," Capt. Brian Block, a spokesman at Marine Headquarters at the Pentagon, said in an e-mail.

Ward took responsibility for the mistake in an interview Wednesday and promised not to repeat it.

"It's my fault. I saw the ad," Ward said. "I should have made the correction."

I'm glad he manned up, took responsibility and corrected it. I had deleted his name in the image I used because I just wanted to comment on the pandering aspect of it all and had no grief against him as an individual, but I will say that he has earned some respect from me. It would have been so easy for him to say that this was an 'attack' by the Obama administration against his campaign but instead he took the high road. That is something that in these days of juvenile politics is praise worthy people.
at April 27, 2010 1 comment:
Email ThisBlogThis!Share to TwitterShare to FacebookShare to Pinterest
Labels: 2010 election, military

So much win, so much fail

Arizona is on the verge of joining Alaska and Vermont as the only states allowing citizens to carry concealed weapons without a permit with few exceptions. This is a good trend and while the democratic controlled government in Tennessee will never go for it, the idea of it here thrills me.

Now there are some sensible arguments for training by some in Arizona.

Firearms instructor Dave Gushert said that training was important, and that the new bill might be a problem. In addition to safety, he said people carrying firearms should also know the laws about when it is legal to use a gun for self defense.

"Everybody thinks Arizona is the wild west and that you can just draw from the hip and go, and this is going to get a lot of people hurt or in trouble," Gushert said.

I agree and the old saying "ignorance of the law is no excuse" really does apply here, and since this likely would be a life and death situation training is paramount. I think if you feel you want to carry you would be dumb not to know the ins-and-outs of what is proper LEGAL use of a handgun for self defense.

The other main issue is the idiots. Like this guy in Arizona...poster boy for the Brady Group.

During the investigation, witnesses told officers 30-year-old David Walter, of Surprise, entered the store with a semi-automatic pistol in a holster. He would reportedly holster the gun and un-holster it as he walked through the store. Witnesses say the suspect ‘continually messed with’ and was manipulating the gun.

Walter was standing at the electronics counter talking to the clerk when he reportedly pulled the gun out of the holster, removed the magazine and put it back in. The clerk got scared and said she was afraid he was going to rob her and notified the store manager.

Walter re-inserted the magazine into the pistol and manipulated it as if loading it when the gun discharged.

Luckily only some ceiling tiles died in his idiot usage, but what the hell ... "magazine dislodged and fell to the floor" and even with that info they did not take the time to tell what type of handgun has the ultimate in self-dropping magazines.

These are the people that leave me with a small fractional desire to have carry permits required. Then reality, the ideas of individual rights, and etc. kick in and I fall fully back into the Vermont carry camp...but those ideas caused a terrifying 2-3 seconds.