a women shoots a guy breaking into her house....and a new rule comes to mind.

Guess you shouldn't bring patio furniture to a gunfight.

In the full 30 minute 911 recording it is frightening how long it took county deputies to get to the house as she waited in terror.

One person on this article said with a whimper in there voice.

Ok, what did he do? He was freaking out because a wreck had just happened and was trying to save the lady's life who is passed out at the accident!! Desperate times calls for desperate measures. If he was armed he would have shot through the window not threw a chair. She should have just wounded his leg, due to that. I understand she was most definately terrified, but she shouldn't have taken his life. What if this was your brother or your father trying to save your mother or YOUR family member's life? How would you feel then?

He was drunk and high and all he had done was drive his truck into a small ditch....no one was hurt, but his 50 year old sister was stoned and drunk still in the truck when found. Yep. a poor innocent victim of gun violence.
at December 06, 2009 No comments:
Email ThisBlogThis!Share to TwitterShare to FacebookShare to Pinterest

I like shotguns. I have only one....sort of, but feel a shotgun has a place in my house before most other firearms. With that said this video makes me feel warm inside.
at November 20, 2009 1 comment:
Email ThisBlogThis!Share to TwitterShare to FacebookShare to Pinterest

We are all children

Well I will admit that I am amazed that they were so open on their view of us. With the turmoil of today it is hard to say anything bad about the Obama administration without being called a right wing hate filled tea bagger....but I'll try.

There is a rather well known phrase from the bible that is a good place to start. "When I was a child I spoke as a child I understood as a child I thought as a child; but when I became a man I put away childish things." I Cor. xiii. 11. Most of us here are adults and most of us here attempt to view things from an adult viewpoint. While we come to different conclusions we are very much not children...I hope. Sadly the nature of some comments I found in an article needs to be addressed and I would like your view of them.
From a Wall Street Journal Article.

When it comes to greenhouse-gas emissions, Energy Secretary Steven Chu sees Americans as unruly teenagers and the Administration as the parent that will have to teach them a few lessons.
Speaking on the sidelines of a smart grid conference in Washington, Dr. Chu said he didn’t think average folks had the know-how or will to to change their behavior enough to reduce greenhouse-gas emissions.
“The American public…just like your teenage kids, aren’t acting in a way that they should act,” Dr. Chu said. “The American public has to really understand in their core how important this issue is.” (In that case, the Energy Department has a few renegade teens of its own.)

In so many ways I find this offensive as I have looked at the issues and come to a conclusion. To say that a conclusion that they might find in opposition to them as childish goes back to something I read long ago that has guided me in many ways when I view our government.

Immanuel Kant was a German philosopher during the late 1700's. While some of his views were 'odd' there was one from his writings "Principles of Rights" that has struck me as being very important in todays society with our slowly encrouching government.

'No one has a right to compel me to be happy in the peculiar way in which he may think of the well-being of other men; but everyone is entitled to seek his own happiness in the way that seems to him best, if it does not infringe the liberty of others in striving after a similar end for themselves when their Liberty is capable of consisting with the Right of Liberty in all others according to possible universal laws.'*A Government founded upon the principle of Benevolence towards the people*after the analogy of a father to his children, and therefore called a paternal Government*would be one in which the Subjects would be regarded as children or minors unable to distinguish what is beneficial or injurious to them. These subjects would be thus compelled to act in a merely passive way; and they would be trained to expect solely from the Judgment of the Sovereign and just as he might will it, merely out of his goodness, all that ought to make them happy. Such a Government would be the greatest conceivable Despotism; for it would present a Constitution that would abolish all Liberty in the Subjects and leave them no Rights

.People throw around the term Socialist, Fascist and all other terms with little knowledge of what they really mean. I fins that using the term "paternalistic" works the best as it is understandable, and shows how both parties work towards the worst of Kant's Paternalistic government view.

We now have a member of the government admitting that yes we are living in Kant's paternalistic governmet. His honesty that we are ALL children and need to be guided by the parents should be offensive to both sides of the party spetrum.

It should be noted that the article ends with this blurb

Energy Department spokesman Dan Leistikow added: “Secretary Chu was not comparing the public to teenagers. He was saying that we need to educate teenagers about ways to save energy. He also recognized the need to educate the broader public about how important clean energy industries are to our competitive position in the global economy. He believes public officials do have an obligation to make their case to the American people on major legislation, and that’s what he’s doing.”

I simply feel his words are damning enough to feel Kant just rolled over in his grave.
at September 22, 2009 No comments:
Email ThisBlogThis!Share to TwitterShare to FacebookShare to Pinterest

After the men entered the store, they announced a robbery, and one, armed with a semiautomatic handgun, pistol-whipped an employee, police said.

From about 20 feet away, Augusto raised the shotgun and fired three blasts, hitting all four men, police said.

Of course the article had to bring in the government to piss me off.

New York City police said they were investigating whether Augusto had a permit for the shotgun. The New York Times, quoting a law enforcement official, said on its Web site the district attorney was considering a possible misdemeanor weapons charge against Augusto, which would indicate he did not have a permit.

He just stopped a crime, and a crap load of future crimes in a obviously legal shooting and they hassle him over a damn permit. People wonder why I'm a libertarian.. It's crap like this that does it.
at August 14, 2009 No comments:
Email ThisBlogThis!Share to TwitterShare to FacebookShare to Pinterest

Some people should not be allowed to breed.

I finished my BA in Liberal Studies. I'm taking the Fall off to get things in order and starting back to school in January on my Masters.

I'm going to be blogging here a little in the near future and having fun and reconnecting with some blogs that have fallen by the wayside.
at July 18, 2009 No comments:
Email ThisBlogThis!Share to TwitterShare to FacebookShare to Pinterest 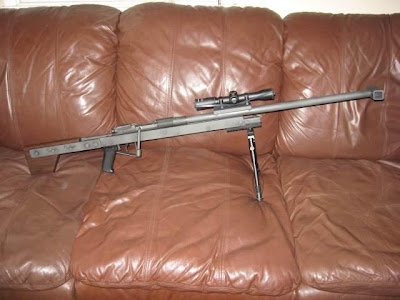 This is an interesting piece and if real likely kicks like a mule.
at February 27, 2009 No comments:
Email ThisBlogThis!Share to TwitterShare to FacebookShare to Pinterest

at February 22, 2009 No comments:
Email ThisBlogThis!Share to TwitterShare to FacebookShare to Pinterest