A sob story about supply and demand in the ex-Great Britain, and a gun...of sorts.

The revolver that killed Dre had the words “Made in Russia” imprinted close to the muzzle, and was fitted with a silencer to muffle the shots. But nothing could mask the tang of cordite in the air or silence the screams of Dre's girlfriend Lauren.

But the stories image has this auto...not a revolver.

Now later they did identify the handgun correctly while patting themselves on the back.

That gun, The Times has discovered, was a Baikal IZH-79 - manufactured in the Russian city of Izhevsk to fire teargas pellets, converted in a Lithuanian workshop to shoot live bullets, smuggled into Britain and sold to the armourer of a South London gang.

Yep. They 'identified' the revolver.

A scare piece made impotent by blatant errors.

The companies website did have this interesting firearm. Then again I like odd guns myself.
at July 30, 2008 No comments:
Email ThisBlogThis!Share to TwitterShare to FacebookShare to Pinterest
Labels: firearms 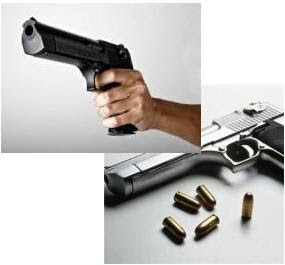 I was checking Google news this morning to see what updates there were on the Tennessee Valley Unitarian Universalist church shooting. I have been several times to the UU church in Murfreesboro and can honestly say they are a welcoming and kind community.

Google news sometimes has small thumbnail images from the article and two stood out for how wrong they were...until I found where they came from.
Enews20.com
inthenews.co.uk

These two European news services spiced it up by throwing in images of the Desert Eagle. The handgun used by the bad guys in most movies. Even when Inthenews mentioned a shotgun in the article(unlike the other one) it still inserted the 'bad gun'.

Wankers.
at July 28, 2008 No comments:
Email ThisBlogThis!Share to TwitterShare to FacebookShare to Pinterest
Labels: grumbles

When law and morality contradict each other the citizen has the cruel alternative of either losing his sense of morality or losing his respect for the law. — Frederick Bastiat
at July 16, 2008 No comments:
Email ThisBlogThis!Share to TwitterShare to FacebookShare to Pinterest
Labels: quote
Newer Posts Older Posts Home
Subscribe to: Posts (Atom)