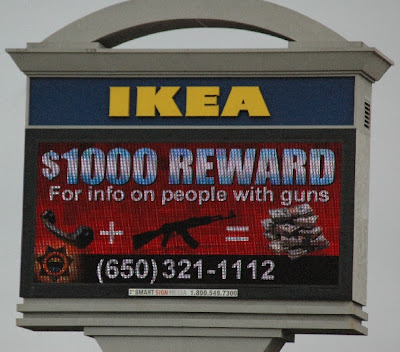 The person who saw this called the police and got the expected run around.

When I asked her what happened with these reports she said that these were only considered “incidents" until an officer checked them out.

When I asked her what she meant by checking them out, she said they would dispatch an officer to the address and see if the person had the “proper paperwork" for the weapon. If not, they would confiscate the gun and hold it pending further investigation. At this point a true report would be filed.

When I asked her to define "proper paperwork”, the process for getting a gun back, etc. she got very evasive and said I had to talk to a sergeant. I was then left on terminal hold. I called back twice with the same result.

Thanks to the Golden State 2nd Amendment Council for the heads up.
at April 09, 2007
Email ThisBlogThis!Share to TwitterShare to FacebookShare to Pinterest
Labels: government abuse, government., police, police abuse, second amendment, universal criminalization