I was rather tickles the day I found out that I had been linked by the Armed Females of America. This post is for that organization.

I was surfing through the archives in the library of congress and came across an image of a whole group of armed females. From The New York Times (New York), March 18, 1917 issue it shows a group of young and old and they all were armed, and seemed comfortable with the firearms. 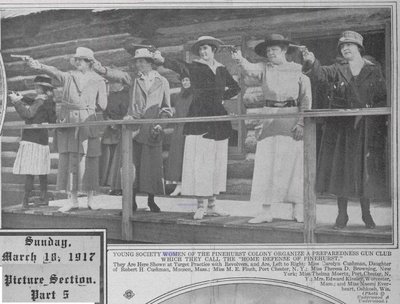 YOUNG SOCIETY WOMEN OF THE PINEHURST COLONY ORGANIZE A PREPAREDNESS GUN CLUB WHICH THEY CALL THE "HOME DEFENSE OF PINEHURST".

I was intrigued by this image. A group of women and even a young girl, all armed in a period when shooting was mostly seen as a man's sport. Who were they and why were they armed?

I first Googled Pinehurst colony and found one return. That was for this picture.

I then google just pinehurst and realized that Pinehurst colony was likely the early name for Pinehurst resorts. Pinehurst was founded by the Tufts family and I contacted the Tufts Archives to see if this image was from Pinehurst. The reply I received was not what I expected.

The image was most likely taken at the Gun Club at Pinehurst, North Carolina. We have several images here from that particular vantage point. From 1916 to 1924, Annie Oakley worked for the resort and she and Frank Butler operated the gun club. Annie thought that it was vital that women knew how to handle firearms. These women were probably her students. 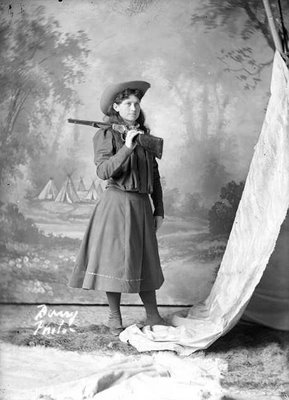 When I originally saw the first image I looked at the date and felt it likely was a group of women worried about the "Huns" attacking America. The problem is it did not seem right. With the Annie Oakley information I did a little digging and came to the conclusion that maybe I was not wrong in the first place.

Annie Oakley was not just a shooting instructor and display shooter. She also involved herself in the politics of the war.

During 1915 and 1916, the Butlers traveled between Pinehurst, Cambridge, and Newcastle-by-the-Sea, New Hampshire. The later was a small resort owned by the owner of their hotel in Pinehurst. Finally, in 1917, the Butlers sold their home in Cambridge and moved to Pinehurst. That same year, Buffalo Bill Cody died. Annie Oakley wrote a long eulogy for him and for the passing of the wild west era.

With Buffalo Bill gone, Annie Oakley continued to press on with her own career. Although she did not return to the traveling arena, she continued to give performances and to remind people how she had fought for her right as a woman to compete with men and to be a performer. She also took great care to remind her fans that she had always been careful to be a lady and to act and dress as such. She and Butler were often unhappy about the costumes and manners of performers in other shows and would never associate with them. However, Annie also made a great effort to make a distinction between her efforts for women's rights and the woman's suffrage movement.

When the United States was pulled into World War I, Annie Oakley offered to raise a regiment of woman volunteers to fight in the war. She had made the same offer during the Spanish-American War. At neither time was that offer accepted. She also offered to teach marksmanship to the troops. She did travel across the country for the National War Council of the Young Men's Christian Association and War Camp Community Service. At stops at training camps, she gave shooting demonstrations. She also raised money for the Red Cross. The Butlers' dog, Dave, became the "Red Cross Dog" by sniffing out donations of cash hidden in handkerchiefs.

It looked like she went ahead and trained her own "home Defense of Pinehurst" group after all.

It does seem that she placed in her life a separation between shooting and the suffrage movement that is a bit puzzling.

Mary Zeiss Stange: Annie Oakley, for a variety of personal and perhaps professional reasons, did not ally herself with the feminist movement of her time. She didn't argue for -- in fact, she explicitly argued against -- women's suffrage. She didn't argue for the kinds of things that the so-called "new women" of her day were arguing for. But interestingly, and ironically, in a sense, she was living a lot of the things that her feminist sisters were arguing for. And in some ways, she was also arguing for some of the same things they were, especially with regard to equal pay for equal work. She was an early proponent of that... In a sense, Annie was rather like the kind of women that you hear still today, who say, "I'm not a feminist, but I believe in equal rights for women; I believe in equal pay for women."

She says she teaches 15,000 women over the years. She tells stories. This is when she starts sounding like a feminist. "I think women should have the right to protect themselves and carry a gun." She even appears in the Cincinnati newspaper, showing how to hide your gun under an umbrella so no one will know you have it. Then if someone attacks you, you can pull it out.

A believer in concealed carry.

Annie Oakley showed the world that she could be better then the rest.

Anything You Can Do, I Can Do Better
I'm superior, you're inferior.
I'm the big attraction, you're the small.
I'm the major one, you're the minor one,
I can beat you shootin', that's not all.

I can shoot a partridge with a single cartridge.
I can get a sparrow with a bow and arrow.
I can do most anything.
Can you bake a pie?
No.
Neither can I.

Annie Oakley and her students. Armed females of America.
at June 21, 2006
Email ThisBlogThis!Share to TwitterShare to FacebookShare to Pinterest