Let it all hang out ladies

This post is more then just a bra story. It is a story of one man trying to have fun. He did, until the f'ing government got involved.

Bra Fence is a infamous landmark in New Zealand. Simply put. It is a fence covered in bras. 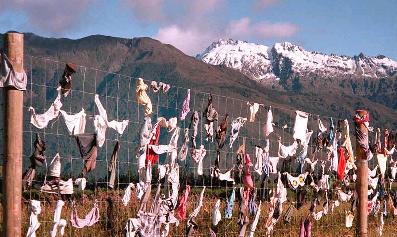 So Frank Cooper and Shirley Cleary saw it in NZ and wanted one for themselves. Tada!!! The Montana bra fence was born. One problem. The Montana Department of Fish, Wildlife and Parks decided they did not like it. Now before you ask. The fence was on Cooper's and Cleary's own private property. So the government went onto the private property and cut them down.

The flap over the bra fence began in July, when the Cooper/Cleary family held a "Beer, Brat and Bra Bust" party at the family's Missouri River vacation cabin. Friends provided bras of various descriptions, plus little black lacy things, for the fence.

"We're talking people 50 to 83 years old, all respectable citizens, like attorneys, social workers, retired professors," Cooper said at his home in Helena. "We drank a little wine, ate a few brats and christened the bra fence."

Oh the horror of the criminal element. Assault support girdles and high capacity form fitting briefs. Call Feinstein.
I have a strange desire to mock the government today and this fits in nicely.

Fish, Wildlife and Parks Director Jeff Hagener said in a letter that there was concern the bra fence would "attract many more objects than just bras and become an even greater attractive nuisance and become more offensive to more people...

"If you insist on continuing to utilize and promote this fence as a 'bra fence,' FWP will continue to remove items hung on the fence until we are able to construct some type of screen ..."

What began as a "fun thing" grew serious, Cooper said.

Mike Aderhold, a regional supervisor for Fish, Wildlife and Parks, said that "even lawsuits were threatened. I thought 'Oh man, we don't need to go in that direction if we don't have to.'"

Lawsuit? How about we arrest the bastards for trespassing. The fence, shown by a surveyor to be on his land, is his to do with as he pleases. The gall that they feel they have the right to go onto his land because

"We manage those sites for multiple uses and get all types of people, as well as sportsmen, from all walks of life and different ethnicities," said Jim Kropp, enforcement chief for the agency. "We didn't feel that this activity was appropriate for a public site."

Oh. The new PC rules of stopping anything that may insult someone trumps all laws about private property, trespassing. etc. etc.

What a bunch of boobs they have in government today.

I will attempt to stay abreast of this story.
at August 31, 2004
Email ThisBlogThis!Share to TwitterShare to FacebookShare to Pinterest